today we'd like to share some details about the auto-map feature in Monster Boy! The game is really big so we're implementing a convenient map that gives you a perfect overview at all the time. Since we don't want to spoil you, we can only show a little preview of the fully unlocked map. Check it out 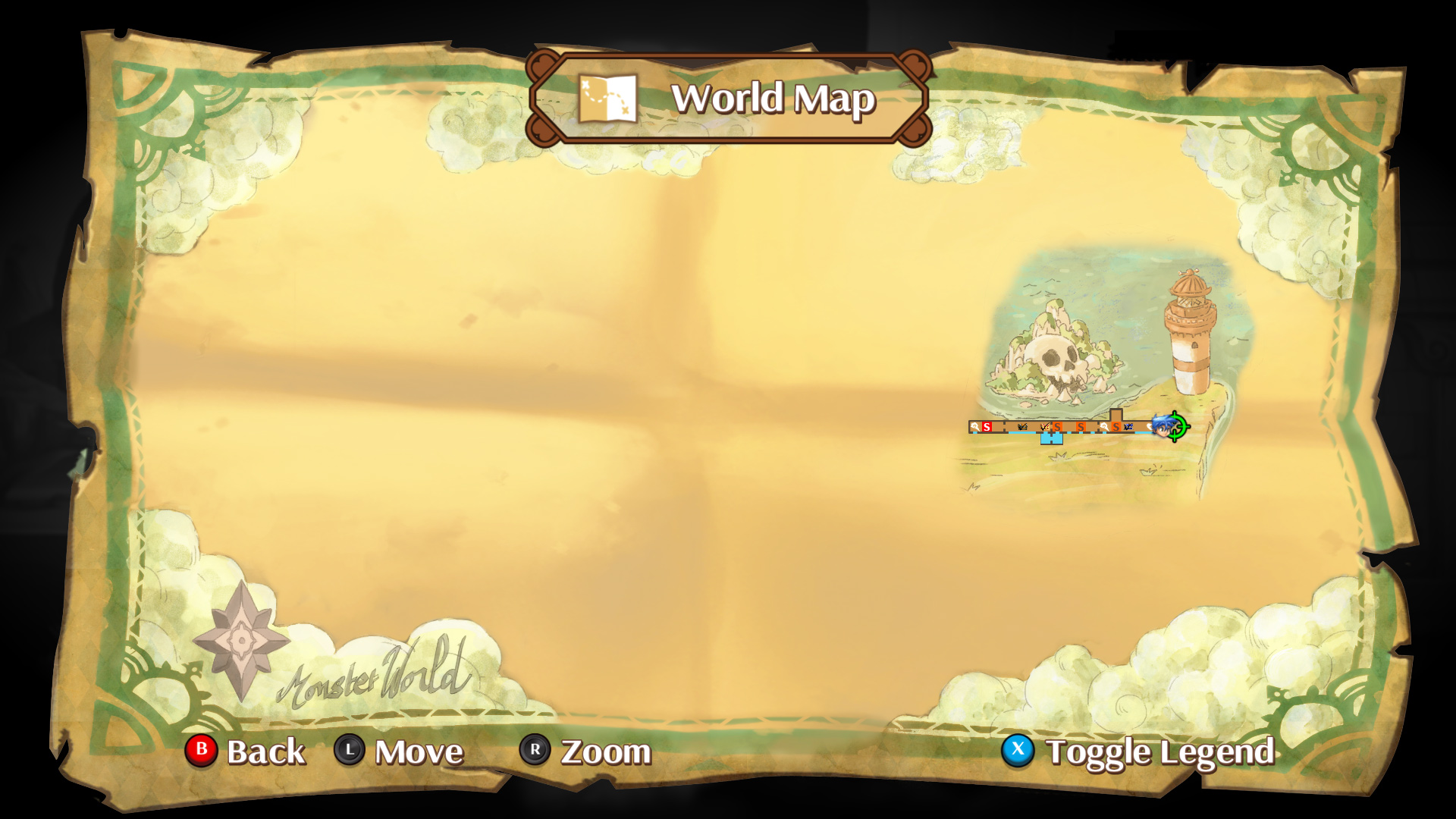 This is the starting area (beach) up until the light-house where Jin faces the first boss
As you can see the map not only shows the pathway, but many more details. Here's a quick overview of some map features:

Auto-Map
While you explore the various areas in the game, the map will constantly draw details into the map. These can include treasure chests, walls, doors, shops, water and more. You'll easily spot unvisited areas if you carefully look at the walls or unfinished room sketches of the map.

Artwork
Each area and pathway will help you to complete a beautiful colored drawing of the Monster World. Just another reward to finish the game and explore the world at 100%.

Quest Target
The current main quest location will be shown as a green target icon, can you spot it in the map ? 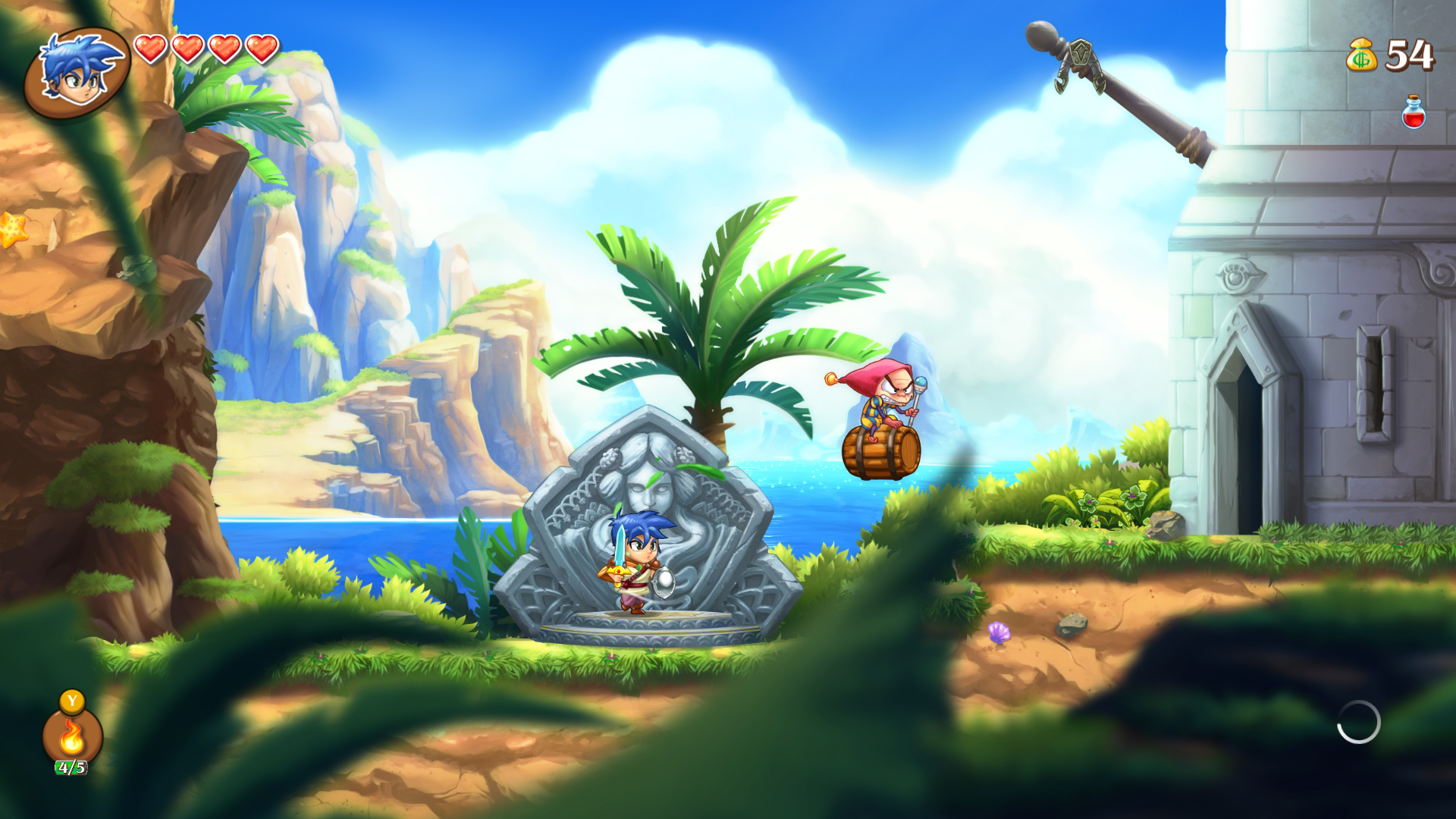 Jin just reached the first main quest target. It's marked with a green icon on the auto-map
It's huuge!
The sample map piece is just a tiny piece of the fully unlocked worldmap. Be sure to watch the new beach area footage during Gamescom to understand the size of the game. The beach part is less than 5% of the worldmap to explore!

No Missables
Focus on your exploration and happily experiment with your characters. The game has no missable item - you'll always be able to explore the world and return to any place later.

Trackback specific URI for this entry

No, no, no! hang on a second this game is meant to out late 2017 FDG promised us all it would be its NOT fair that they keep us waiting and waiting year after year like this ive been waiting since January last year when it was meant to be out
Not going to lie - we've been very confident about the 2017 release. However, we learned a lot during the long development phase and want to make it look and play perfect, therefore we added a lot of workload to the project. This paired with something else we can't announce yet means 2018 release is more probable now. Sorry to be the party pooper here, we really do our best.
its now August so there are five months till the end of the year so PLEASE FDG at least have an official release date for us by the end of the year it gives you five or less months to get it 'perfect' id definitely put this game on my Christmas wish list
You are absolutely right, and I don't even try to think that there is a game that is called "Monster Boy" as I have been patient for too far.

I will be however satisfied if they offer unexpected features like multiplayer, hard mode or great DLCs. As well as a new sequel to within a year.

yeah, I know I am asking for so much. But if it has been released previously by mid 2016, then I believe 2018 would have been the next sequel.
^what Mathew said!!!
Can't wait to get it! On the Nintendo Switch of course

Thanks a lot Adam! Switch is a great choice for this game !

2018 jan hahahahh
That's still very early next year and where did you find out this exciting information????
Don't miss understand me, There is no news of a next sequel yet.
Hello Thomas
Monday July 10 you told me that a demo video will appear on YouTube during retro H.K event. But unfortunatly I did not find this video so than everyone can check the new beach, village etc... When will the video be published ? Thank you
Hi Spidey, thanks for checking in! That's right, the schedule changed a bit but you'll see more material during Gamescom next week. Please stay tuned.
I check now , I just found a 30 sec teaser, please please I want a 20 min video ????
Actually the teaser is even less, but we'll have more to show soon!
This is the fate of overambitious games developed by small dev teams.

To make something really shiny to compete what is out there is not am easy feat for a small group of designers/programmer.

I was told to myself to forget about the existence of the game and will find myself overexcited when I find out someday that this is actually released.

The work you have done FDG looks amazing!
Thanks Dimitrios! Actually the project became more and more ambitious over time because every time we learned something new, we wanted to make use of it and improve the overall game experience. We are confident to deliver an awesome game and there's definitely an end of development cycle in sight.
I know that no date is foreseen but can you confirm us for 2017 or you still have a lot of work and grows back to 2018? thank you
Sorry Spidey, I thought you'd have seen my other reply. As of now there's a high probability that it releases in 2018.
I'm really disappointed to wait 2018 but I understand your point of view. You want a perfect game and I understand that work hard. I really hope it will be perfect because like all players I would have liked 2017. Thanks for your frankness, I hope it will be January 2018 and that you will be at the PGW.
Thanks for your understanding, we will keep you updated on the blog, Twitter and FB!
Like I said 2018 release date Thomas mention something about a project that ties into the game interesting Maybe it's an Xbox one x version or dlc to go along with the game Hey Thomas looks like I'm gonna have to do remote viewing to find out what the project is.
hey Thomas as hard as it is for me and many other monsterboy fans I would've loved to make it 2017 for this game however I now know theres just a LITTLE bit more to do but seeing the demo I do get the feeling its nearly done. but I am really on Spidey981 side here I mean if weve all waited patiently all year to know its next year why not at least release it in EARLY 2018 so January at the earliest. if only I knew what this other game was and the release date then wed all know exactly then when monsterboy is out. but lets say this other game your tying the release to is released late 2017 then you could release this one at the same time if it does happen like that
hey Thomas remember this post? Not going to lie - we've been very confident about the 2017 release. However, we learned a lot during the long development phase and want to make it look and play perfect, therefore we added a lot of workload to the project. This paired with something else we can't announce yet means 2018 release is more probable now. Sorry to be the party pooper here, we really do our best.

well according to the comments on here I think this game will come out very early next year when the xbox one X is released in January 2018 and the game is the biggest launch title called crackdown 3 will also be released in january was meant to be november this year. now if this is true that is fantastic news and then well all get to buy and play monsterboy the month after Christmas so I am HOPING I'm right!!!
this is to both ALL of the staff at FDG entertainment and Monsterboy fans and this is OFFICIAL. go to a site called www.dualshockers.com and youll see this awesome news.

see it says it WILL be released later this year and this news was very recent only this month and it was said by a staff member by FDF entertainment too.
Hi Matthew, please wait for an official definite release date announcement on our own sites and not press-related sites. We never said to dualshockers that the game will be out in 2017.
Hello monsterboys

Is there dlc coming for this game or are you thinking about
i hope not cause then it s yust like other companies screwing you over for a half ass game and you can pay extra for the new levels or wait for a new physical with dlc included
Why not make a second gasme instead of making dlc content
never could understood why gamemakers do this
cause once the system vanish so us your download stuff
Hi Locomotive, there's no DLC planned.
hey Thomas but do you understand that I have been waiting patiently ALL this year (theres 12 months in a year that's a LONG time) for this game when it was meant to be released back in 2015/2016 and I cant see much of a difference in graphics either. So now ive decided ill go back on this blog at the very end of October when there should be some news regarding the release date of this game otherwise I just keep on getting disappointed. and please try and understand that I am willing to wait until early next year but NO MORE than that. and if its official that its next year you should put on this blog that it wont be out this year and reasons on why so fans understand much better
Hi all Monster Boy Fan

Here a new video gameplay with all new complete beach, Frog Man and the beautiful Aztec World. And at the end of video a nice surprise. I hope this will fill your expectation a little.

https://www.youtube.com/watch?v=wWYiYzXBrv4
Just had a look at the new clip and was blown away. The graphics updates are STUNNING

To Jj
I fully agree with you. Did you see the cinematic at 29:40?
Hi Spidey. I decided not to watch the end clip, as I'd rather wait toll release for curscenes. The glimpse of it I got, though...very impressive.
Hi everyone

The same video with Banjo Guy Ollie but with the real color. In the first link the video was a little " blue ".

https://www.youtube.com/watch?v=nYNfU0QW_2w
Woow this map is just brilliant !! I, as a hard core old school gamer, would like to suggest just one thing, make a hard mode ,please!! Without those "current quest location, auto map and stuff... Make some hard mode ,please! Thats what makes this serie good. I know the map is huge and stuff but make a hard mode for it , i beg you!!
Hi Junior lima, thanks a lot for your feedback! We'll have to keep the Auto-Map feature in Hard-Mode too, because the map has some other important functionality for the game that we can't drop. However, we'll see if we reduce the features in hard mode but it would mean additional work and testing that we probably don't have. Improved hard mode may slip to a later update of the game.
Thank you for your answer. Thats great! Can`t wait for this game. Hope we have some news about release date soon. Keep it up!